Before I get into the responses, allow me to provide some context...

This coming week, I will be joined by many of my NYS Master Teacher colleagues from the Central NY, Capital Region, Mohawk Valley, and North Country Regions for our annual conference. In addition to many great Master Teacher-led breakout sessions, there will also be "Open Space" discussions taking place around the central theme of "Fostering Interdisciplinary Collaboration".

I was asked to facilitate a topic of my choice that relates to the central theme. So after some brainstorming, I came up with the quote in the tweet.

I've been teaching for many years and as an experienced teacher, my instructional style has evolved. During my early years, I, like most beginning teachers, stuck to the script. Carefully developed lesson plans became something akin to cue cards and worksheets and packets became the props.

But once I got my teaching legs (i.e. confidence), I started to develop activities and explorations that allowed students to discover math. What better way for students to be engaged in a lesson if they become the mathematicians? I never wanted to become this guy (aka "The Sage on the Stage"):

After developing my teaching chops for 9 years in a small rural middle school in NH, I came to teach high school in a large suburban district in upstate NY.

My new teaching assignment included teaching year one of a program titled "Integrated Regents Program". This was a program where classes were small and the math, science, and CTE teacher worked in teams. The idea behind these teams was to support the students, since we all taught the same 45 students (three sections of 15 each), and to develop interdisciplinary activities. The second part was great, in theory, but not always put into practice. But what did happen is that I became connected and developed a rapport with teachers outside of my department.

As I taught year one, and in later years, year three of the program, I was able to leverage these relationships as sources for inspired-integration. During the course of our conversations and my visits to the science and CTE classrooms, I was able to develop many investigations or labs which became means for the students to investigate and/or apply the math concepts that we were working on. I quickly found myself spending more time doing labs in these classes, because the students (and I) enjoyed them more. We all got more out of these activities than working on a packet.

One of my favorite labs involved testing wall anchors. This was part of our unit on vectors. We would "do the math" to calculate, in theory, how much a particular wall anchor should support. Then we put it to the test. Here is a video showing one of our tests:

Another one of my teaching assignments included teaching a section of "Math Lab". Unfortunately, I think the term "Lab" was a bit of a misnomer. Math Lab was a AIS period where students were assigned if they needed remediation in preparation to take or possible re-take a Regents examination. The class was not at all a lab and was just more worksheets and a second period of math for students who most likely do not like math and struggle.

So that brings me to my tweet? I think the question is a rhetorical one. Of course math classes should have labs! I don't think many would disagree. But what does a math lab look like? I think of two models.

The easiest being activities and investigations that take place in the classroom. Break away from the packet/worksheet and actually do math. This can involve using manipulatives, dynamic software like GeoGebra and Desmos, and resources from other content areas in your school. Here is a couple of methods for demonstrating the rotation of a triangle around one of its edges:

But why can't math classes have a lab period? Most schools have separate science lab periods built into their schedules (Bio/Earth Science/Chem/Physics lab). Why not offer Algebra/Geometry/Algebra 2/Pre-Calc/Calc/Stats labs in a student schedule? The obvious answer is "time" - not enough periods availble in student schedules to do this? But some schools do include a lab period for some math classes (thanks Dan and Tim for your feedback): 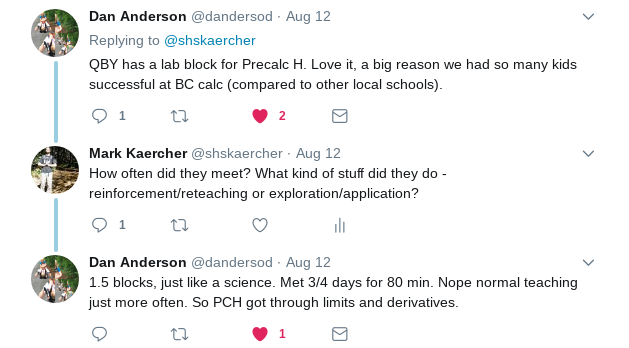 Perhaps my favorite response though is (thanks Berkeley):

So I've got some good thoughts going into our "Open Space" discussions on Friday with the NYS MT's. Until then, feel free to turn your class into a lab!

Popular posts from this blog

Adding a Button/Script to a VRG Generator Google Sheet 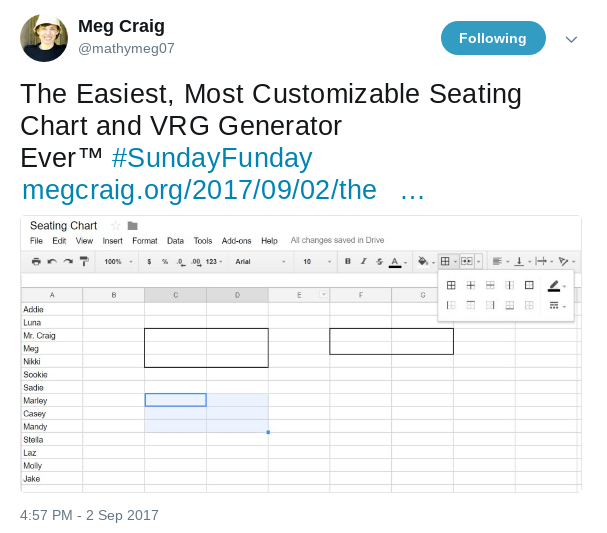 As I am planning my preparations for the new school year, I came across a recent tweet from Meg Craig:
She included very simple instructions for using a Google Sheet as "The Easiest, Most Customizable Seating Chart and VRG Generator Ever™". The acronym VRG refers to "visible random grouping", a method for setting seating charts and student groups. Her very detailed directions can be found HERE.
After setting mine up to fit my classroom layout, I got the idea of adding a button to activate the randomizing. I had limited experience with buttons and scripts from my days of working with Excel. So I started Googling.
First, I found the directions to add a BUTTON.  Once the button was added to my Google Sheet, I needed to develop a script to make the button do it's job.
Unfortunately, I am not a computer programmer. Fortunately, with some Googling, I was able to find the SCRIPT that would randomize the name cells with a click of the button.
I made a little edit to w…
Read more 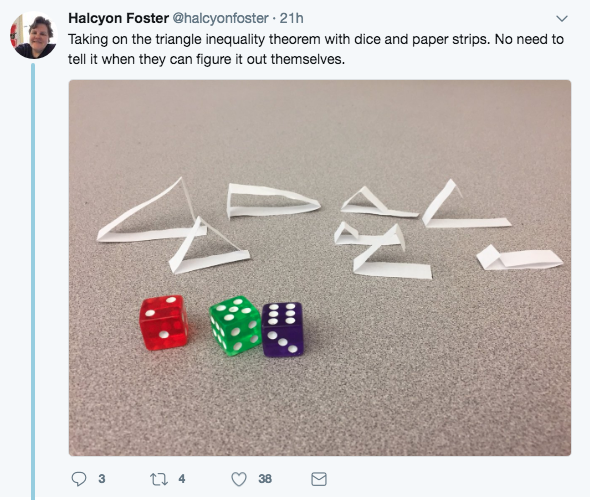 I know... sounds exciting right? Please bear with me... I was inspired today! As a geometry teacher, I am always looking for ways to visualize and demonstrate geometric concepts. Often times, I utilize tools like GeoGebra or Desmos. But frequently, geometry can utilize simple resources.

This morning, I came across a tweet from Halcyon Foster:


I really like how this utilizes simple materials that most geometry teachers have - paper, ruler, scissors, and dice. It looks like the idea is to roll the dice, then take a strip of paper and measure and divide it into lengths (in this case 2cm, 5cm & 6cm). Then fold the strip to try to make a triangle. It's simple and effective, and serves as a great way to investigate the triangle inequality theorem.
It inspired me to think of a way to "kick it up a notch". So I turned to one of my favorite geometry tools - bendy drinking straws! Here is what I put together:
Supplies: Bendy strawsScissorsRulerSharpieZiploc BagThree Dice
Assemb…
Read more 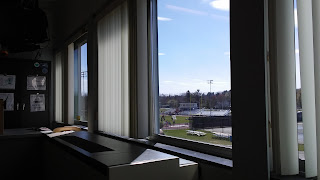 As the school year enters fourth quarter, teachers are blessed/cursed by the arrival of nice weather. For those of us in the northeast, we rejoice the end of winter and celebrate the boost to the spirit from the new spring. But along with that comes the battle to keep the students on task and motivated as they can sense that the end of the school year can't be that far away. I have an extra challenge as my classroom looks out on the tennis court and track, and I am always competing with teens enjoying gym class for the attention of my students.

One of the last units that we cover in Geometry is our unit on Circles. Having taught Geometry for a number of years, I have always been on the lookout for new ways to engage students with the many terms, concepts, and relationships that come with the Circle unit.

While it is always easy for me to immediately go to the Chromebooks and have the students use Desmos and/or GeoGebra to investigate, I decided to go low-tech (again) this year. I…
Read more